Speleological objects in flysch - caves and pits in Croatia 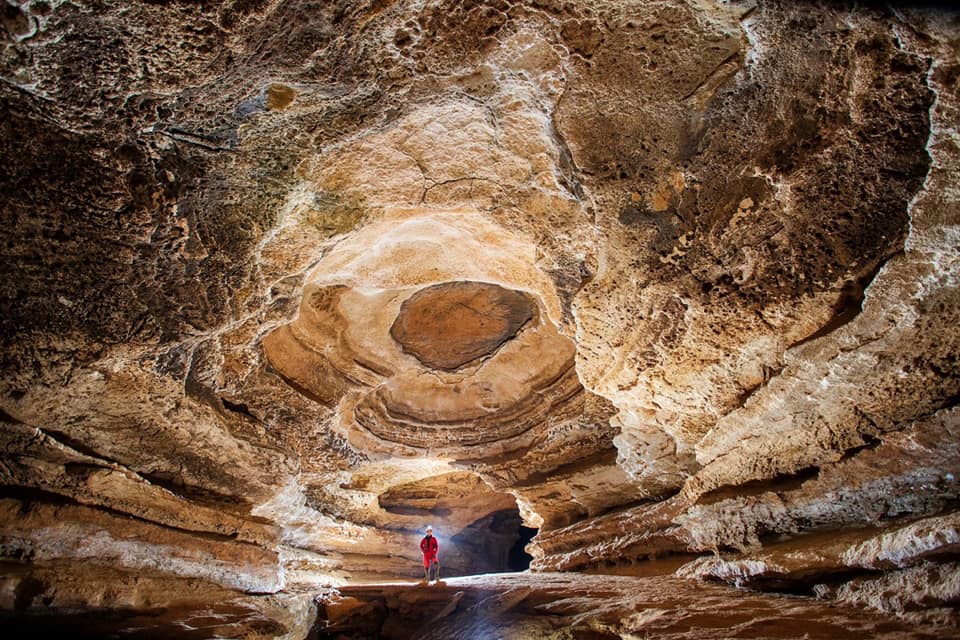 The formation of speleological objects () takes place in three phases and is closely related to water activity.
In the first phase, surface water is filtered through microfractures and layer boundaries in the rock mass, slowly dissolving and expanding them.
In the second phase, the flow is more pronounced by widening the cracks. At this point, gradual activation of fluvial erosion starts – water mechanically tears off particles and rock fragments, and the process of cracks expansion is accelerated.
The final phase occurs gradually, following the decrease in water flow activity. This phase is characterized by sedimentation and intense crystallization of speleothems, followed by rock collapse (Šuica, 2010). In some cases, these last two phases can be altered through reactivation of the water flow resulting in the formation of complex structures and geomorphologic characteristics (Kuhta, 2001).

Final cavity dimensions are conditioned by duration of active underground water flow and base rock characteristics, as well as by mechanical erosion. (Kuhta, 2001).

More than 9,000 caves and pits have been discovered in Croatia by 2013, but precise data on the final number has not yet been fully integrated within the State Speleological Cadastre (HAOP). Croatian karst is world-famous for deep pits. Up to this point, there are 54 pits deeper than 250 m, of which 3 are deeper than 1000 m – Pit System Lukina ama-Trojama (-1431 m), Slovačka pit (-1320 m) and the Velebit Pit System  (-1026 m). A total of 18 are deeper than 500 m. The largest number of deep pits are located on the mountains of Velebit and Biokovo (HPS, Speleology Commission).

Grey or green Istria is the central part of the Istrian peninsula, consisted mostly of Eocenic flysch deposits.
Flysch is a term for deep-water turbidite sediments, which consist of continuous alterations of marl layers, shales and sandstones, and more rare types of rocks, breccias, and carbonates. Many swallow-holes can be found on the flysch and limestone deposit contacts, e.g. Kobiljak near Buršići – Gračišća 286 m and Marfanska pit, which is, with 2045 m of explored canals, the longest Istrian pit. The longest cave completely located in the flysch sequence is Piskovica Cave, with the length of 1036 m.

The cave is a unique speleological object of its kind. Erosion of the marl layers between two carbonate plates resulted in a 1036-meter-long creek. The cave is morphologically characterized by a flat ceiling, a slight constant drop, quadratic cross-sections and two completely different types of mechanical discontinuities.

Crucial for the cave formation were beforementioned discontinuities – rectangular cracks, sigmoidal cracks, water flow through the cave. Since this is a well-developed and connected cracking system, a relatively small volume of water was needed to create a 1 km long creek.

The recent stream erosion of newly formed gravel, sand and clay deposits, as well as speleothem erosion, points to the multiphase variable dynamic and chemical flow regime in the cave.

Another cave is located nearby (300 m SE) – Piskovica 2, with almost identical morphological characteristics, 256 m in length. It was formed within the same sequence as Piskovica 1. It ends with a narrowing of the creek filled with fluvial sediments, while the water flow through the cave springs on the south side of the slope. (Jekic, 2017).

North of the Studena village, nearby from the city of Rijeka, we find the Flysch Cave. Flysch is clearly visible on the slopes of the small canyon formed by the occasional turbidite water flow. The pit entrance is on the slope.

The pit is formed in the transitional deposits of the Eocene, mostly made of marl layers. As it is typically a non-permeable rock, the development of speleological objects in marls is very rare. The mentioned pit was formed on the contact of marls and permeable foraminiferous limestones. Limestones are deposited underneath the marls and are the main recipient of water that flows through the pit hole.

The formation of the speleological objects in flysch is very rare and it usually occurs in contact karst, i.e. they are formed in contact with limestones (Marfanska pit, Flysch Cave, Flysch Cave). The Piskovica Cave is mapped as a flysch sequence that belongs to the Pazin Paleogene basin. The main creek is formed between the nummulite breccias in the ceiling and sandstones at the bottom of the creek in the lower parts, making it a unique and interesting occurrence in a country that counts over ten thousand registered speleological objects formed in karst.