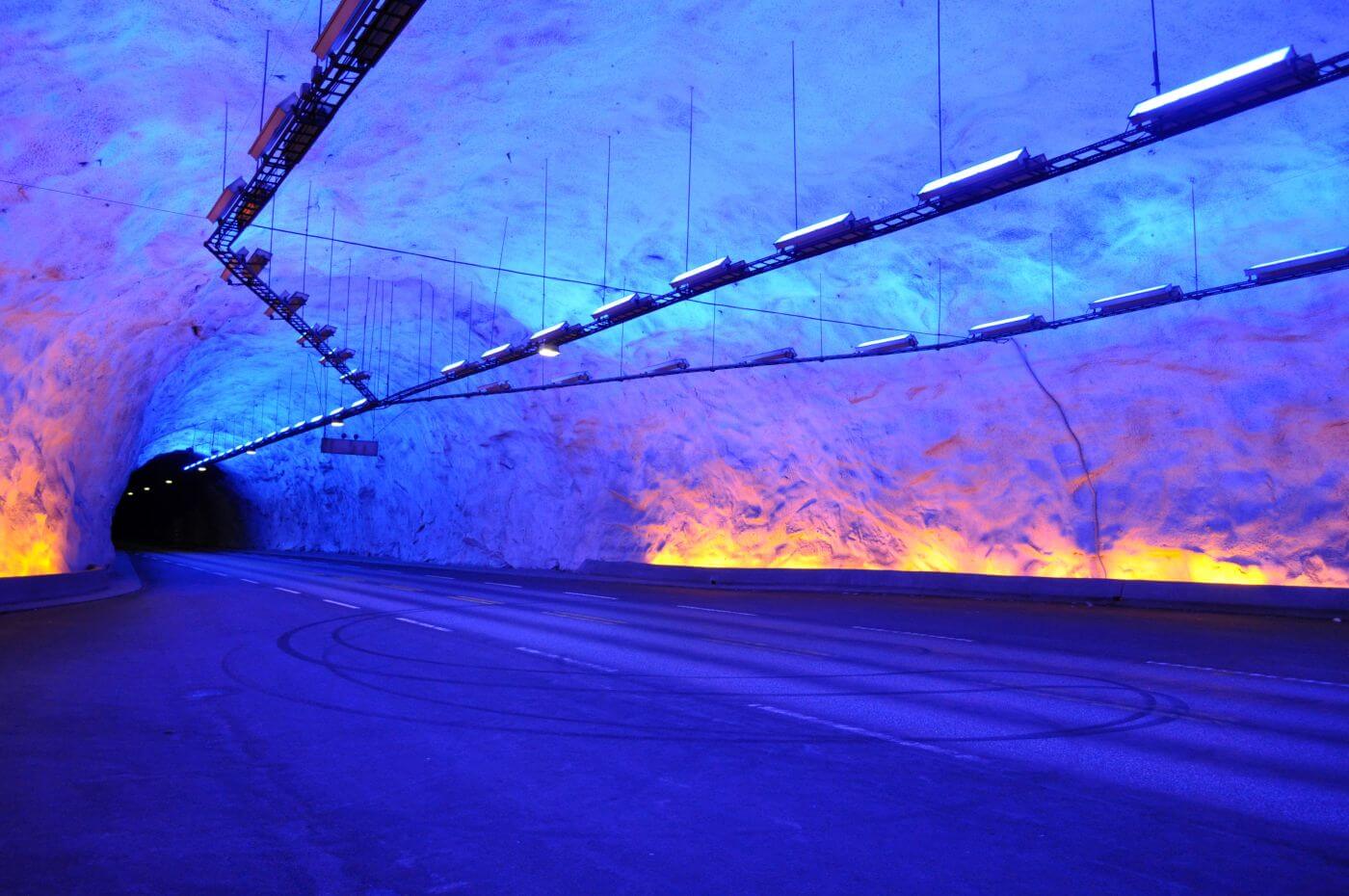 Lighting effects in the longest road tunnel in the world – the Lærdal Tunnel, Norway

Norway is a country of an exceptional landscape, known for its fjords and high mountains, so it is no wonder that Norwegians build tunnels that not only pass through hills and mountains but also connect fjords.
The Lærdal Tunnel is the longest road tunnel in the world. This impressive 24.5 km long tunnel stretches between Aurland and Lærdal and is part of the new main highway connecting Oslo and Bergen. The decision to build a tunnel rather than refurbish existing roads was made to avoid difficult terrain with high risks of rockfalls.

Construction of the Tunnel

Works on the construction of the tunnel began in 1995, from three positions at the same time. They consisted of drilling, blasting, loading, transportation and rock protection.

Approximately 100 boreholes, 45-51 mm in diameter and 5,2 m deep, were drilled for each blast. 500 kg of explosives were used for each blast in order to fracture the rock mass into pieces. The tunnel walls and vault had to be secured before further drilling progressed. For this purpose, rod anchors and a special type of shotcrete with a reinforcing mesh were used.

A total of 2.5 million cubic meters of rock mass fragments were removed during excavation. A permanent road was built in parallel with the construction of the tunnel, along which materials were continuously exported to complete the work on time.

One of the challenges during construction was how to provide drivers with a sufficient amount of fresh air for the 20 minute drive through the tunnel. A 2.5 km long ventilation air exhaust shaft was dug leading from the tunnel to a nearby valley. The fresh air circulation system works in such a way that fresh air enters from both ends of the tunnel, while polluted air exits through the ventilation air exhaust shaft. In the part of the tunnel leading towards Aurland, additional 32 smaller fans were installed to accelerate the flow of air to the ventilation shaft. Due to the large amount of polluted air, a decision was made to construct another smaller tunnel parallel to the main tunnel, at the 9.5 km point from the entrance in the Aurland direction. The purpose of this 100 m long additional tunnel is to hold an air purification plant so that the air from the main tunnel is directed towards it.

In September 1999, the tunnel was completed and opened for traffic.

Lighting effects as a trademark of the tunnel

Special attention was paid to appearance and interior design. A special team of psychologists was engaged in the interior design to help avoid monotony while driving through the tunnel.

The tunnel is divided into four parts – the main part and three extensions at 6 km intervals. A lighting system simulating natural light at dawn has been installed in all parts of the tunnel. The main part is illuminated with white light, while the extensions are permeated with blue-yellow lights to give the impression of sunrise.

The Lærdal Tunnel is one of the safest tunnels in the world – in case of ventilation system failure or high concentration of exhaust gases, it completely closes for traffic.

Read more: Tunnel of the future in the Northern Europe