Tunnel of the future in Northern Europe I Geotech doo I 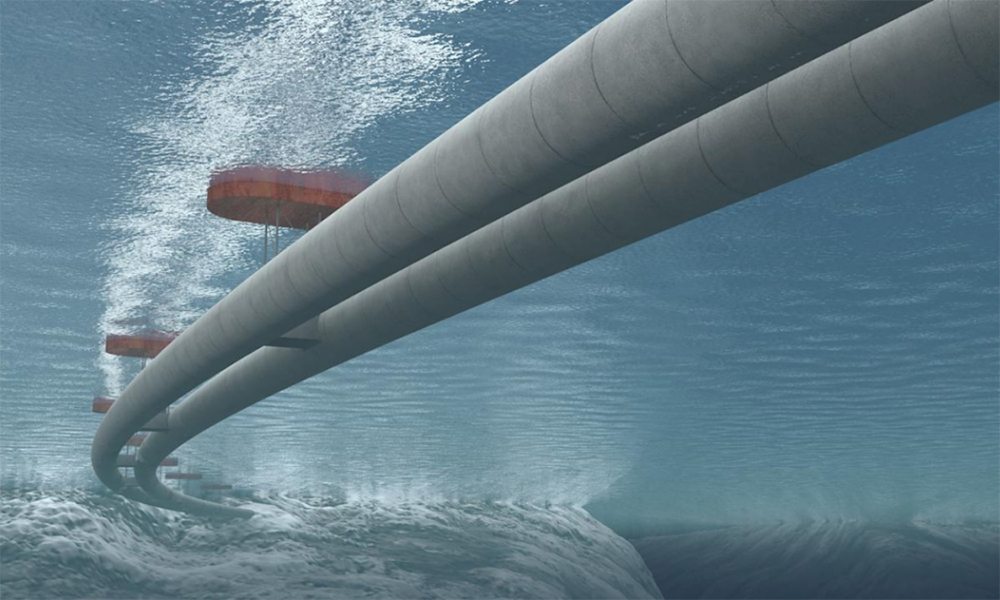 Tunnel of the future in Northern Europe

Norway is a country of fjords and glaciers, lakes, mountains, forests and wooden houses in fishing villages and legendary myths.

However, the most famous symbols of Norway are fjords, winding sea bays emerald green in color. These are actually sunken valleys of former icebergs which have been hollowed by mechanical erosion, deep below sea level and down the valleys which they moved. When the glaciers melted, the crevices in the valleys were filled with sea water. 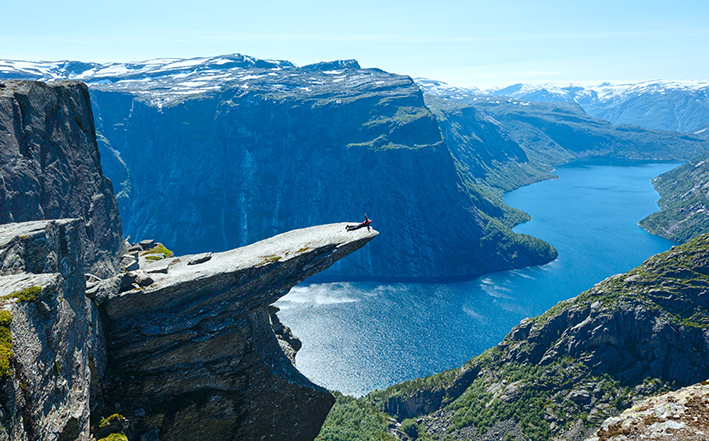 So far, the only way to travel through Norway and its fjords is by transferring to several ferries, which is actually quite a lengthy and complicated process.

In order to facilitate the journey through Norway (which lies on 1.190 fjords) and connect the city of Kristiansand to the south and Trondheim to the north of the country, the Norwegian Public Roads Administration (NPRA) has proposed the construction of the first underwater floating tunnel in the world, which would be located in Norway. The current journey with the existing road infrastructure and ferries lasts 21 hours and requires transfers to 7 ferries. 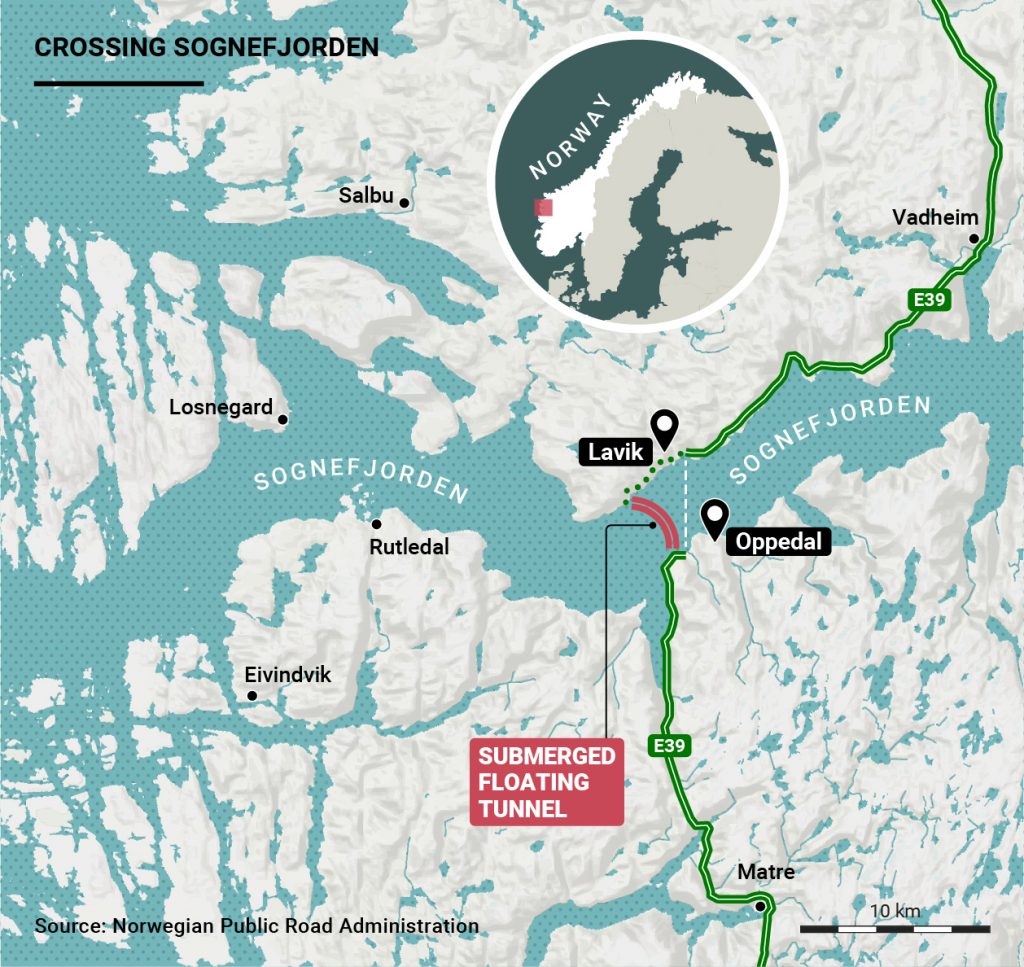 Contrary to classic underwater tunnels, which are built on the seabed or drilled into the ground below the seabed, the Norway tunnel would be located at a depth of 30 m below the surface and be fixed to massive pontoons on the water surface and connected to bearings in order to ensure stability. Pontoons would be placed at a distance sufficient for ships to pass between them smoothly. The tunnel would consist of two parallel tubes, and in each of them traffic would be only in one direction. Each tube would have two lines – one for travel, the other for emergency and repair.

Although there are currently a lot of open technical questions, the Norwegian government approved the start of the project.

This capital project is estimated at least EUR 25 billion. The first phase of the project will be the Sognefjord crossing at the route from Lavika to Oppedala. The largest and deepest Norwegian fjord is about 4.5 km wide which prevents the construction of a bridge, while the depth of 1,300 meters makes the construction of a classic underwater tunnel technically impossible.

Sixteen floating pontoons would hold the structure 12 to 20 meters below the surface with a medium spacing of 400 meters so that ships could pass safely.

Detailed analysis and calculations are needed to determine the wind force and sea currents on the construction, along with the calculation and design of structure, and it is estimated that almost 400,000 m3 of concrete will be required for the execution of this tunnel. 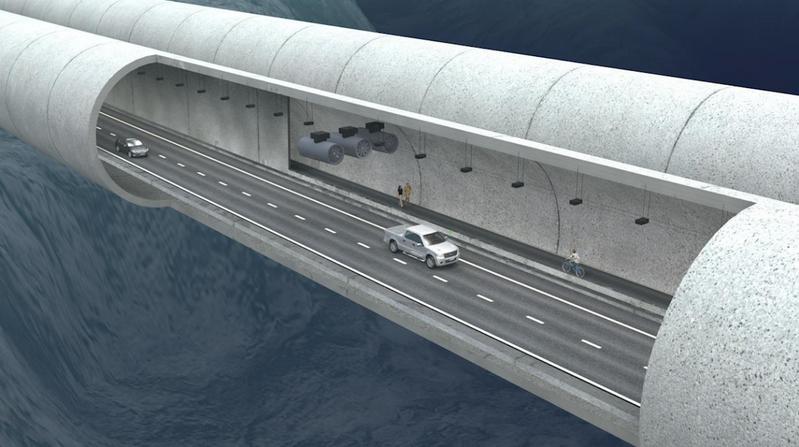 Due to the fact that in Norway nothing is done from today till tomorrow, and from idea to realization is a long way, there is still no doubt that one day this will be done. The general plan is that this tunnel would be constructed by 2035.

There are many challenges before the realization of this demanding engineering history project because something similar has never been done before. Therefore, no one can know how the underwater tunnels will be affected by wind, waves, and sea currents. Time represent a natural threat to constructions, especially maritime concrete structures, so maintenance costs are important and have significant affect on the project’s profitability.

In order to protect the existing resources for future generations,  and so future generations would enjoy the picturesque route and fascinating landscapes,  engineering solutions should be innovative and encourage further development of project solutions in which the landscape is a factor of the spatial planning strategy.

And finally, just remember how the tunnel below La Manche sounded impossible, and it was opened in 1994.