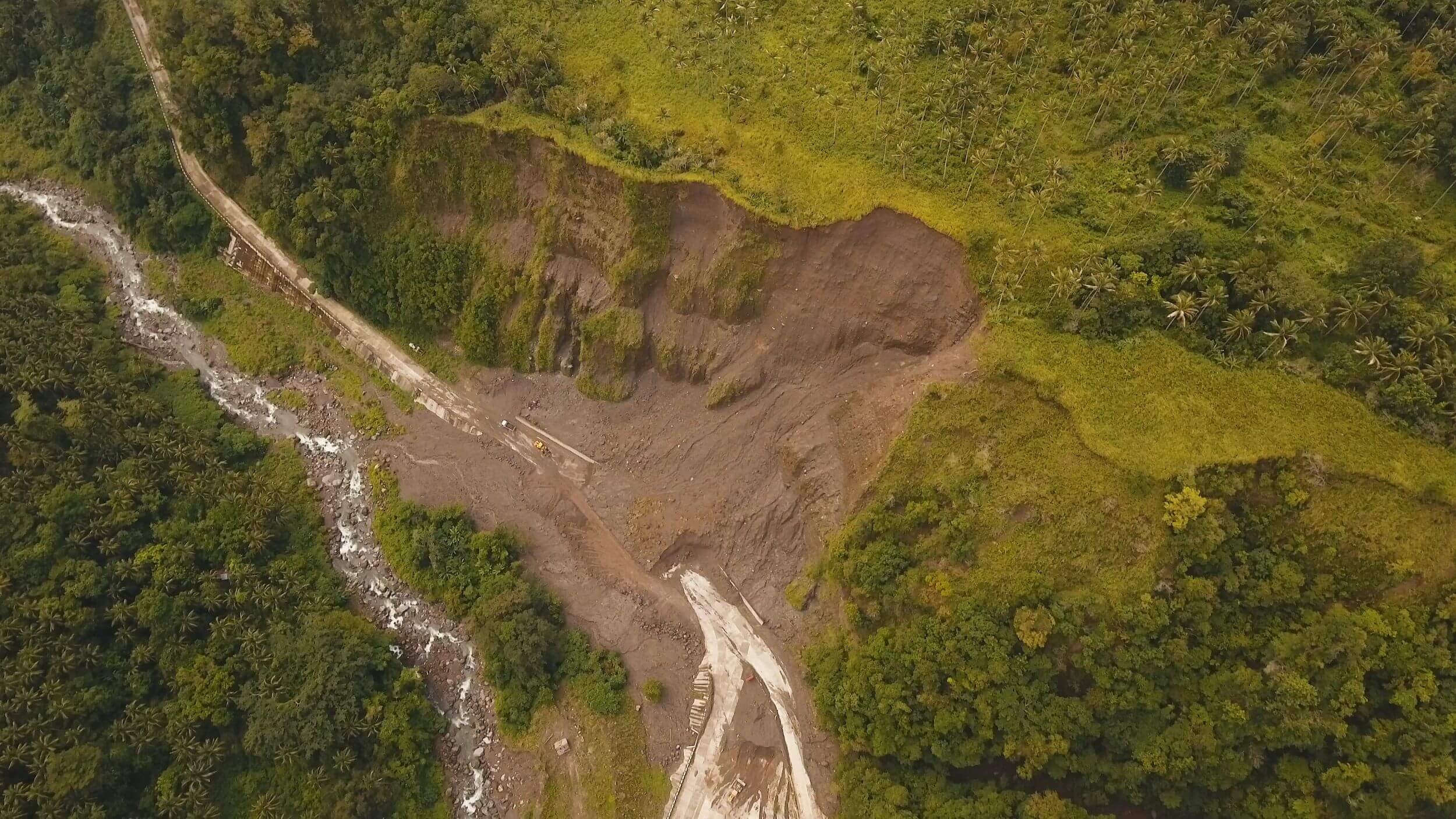 Landslides are phenomena that occur as a result of sliding processes. In some cases, landslides can also occur after other types of movement which occur either immediately after a breakdown or later, when a mass moves down a slope, as a consequence of the changes in the properties of the triggered material.

Maps are a useful and common way of presenting information about slide danger (hazard). They can show different types of information depending on the scale, that is, how detailed the map is.

When mapping individual landslides, identification and investigation of specific problematic landslides are carried out. The investigation and mapping scope are usually the size of a single piece of building land. Detailed landslide investigation usually involves exploratory core drilling, sampling, laboratory testing and other investigation works necessary to obtain the data required for design and construction.

Stereophotogrammetric analysis of aerial photographs on stereo pairs lets us extract different types of images and data on vegetation cover, topography, drainage pattern, soil drainage character, surficial geology, land cover (and/or its purpose) and landslides. A more extensive study of aerial photographs and vertical stereo pairs enables us to obtain significant information on landslide type and frequency and the effect of management practices.

InSAR (Interferometric Synthetic Aperture Radar) or satellite radar interferometry uses microwaves of electromagnetic radiation in the frequency range 108-1011 Hz, corresponding to a wavelength of 1 to 1000 mm. Radars used to record the Earth’s surface have a wavelength greater than a few centimeters and are therefore not disturbed by clouds, rainfall or fog, so they capture reflected microwaves day and night, regardless of weather conditions.

LiDAR (Light Detection and Ranging) images, which stand for ‘detection and distance determination of objects by light waves’, are obtained by laser scanners. Laser beams pass through the vegetation on the terrain surface, making it possible to capture terrain images at locations where obtaining an image using a simple photograph is not possible due to the forest cover. In this way, it is possible to obtain a very precise digital elevation model (DEM).

The technology is based on the scientific insights into the speed of light and the narrow coherent laser beam that the device emits into space. The air moves at the speed of light and bounces off the physical obstacle and returns to the receiver located in the device from which it was sent. The device measures the time it takes the laser beam to make the path to the obstacle (terrain or objects such as buildings, homes, roads, etc.) and back to the sensor. Using the distance and angles data, i.e. the distance between the measured points, each point can be represented in space with its spatial 3D coordinates. Such a method gives as a final result an accurate 3D model of space, which in practice finds very wide use and application in various practical and scientific disciplines.

Using the landslide remote sensing device, accurate information about the existence of landslide zones, their progression over time, and their exploration and investigation can be obtained. The landslide investigation method using aerial photography stereo pairs and InSAR imagining is effective for long-term large-scale landslide monitoring. The LiDAR images give us an insight into the current condition, with no surface obstacles and the obstacles that limit the first two methods. This enables us to have better quality data and for this reason, this method has been actively applied in the Republic of Croatia in the last few years.
Currently, the scientific project “Development of a methodology for landslide susceptibility assessment for land use planning using LiDAR technology” (LandSlidePlan) is underway and will be implemented by the Faculty of Mining, Geology and Petroleum, University of Rijeka and the Faculty of Civil Engineering, University of Rijeka, in cooperation with scientists from the University of Florence in Italy and scientists from Slovenia. The project will be carried out in the areas of the City of Zagreb, Zagorje and Istria. The purpose of this project is to systematically map and record landslides in the Republic of Croatia to prevent these types of instabilities.