Professional excursion to Pelješac I Geotech d.o.o. Rijeka I 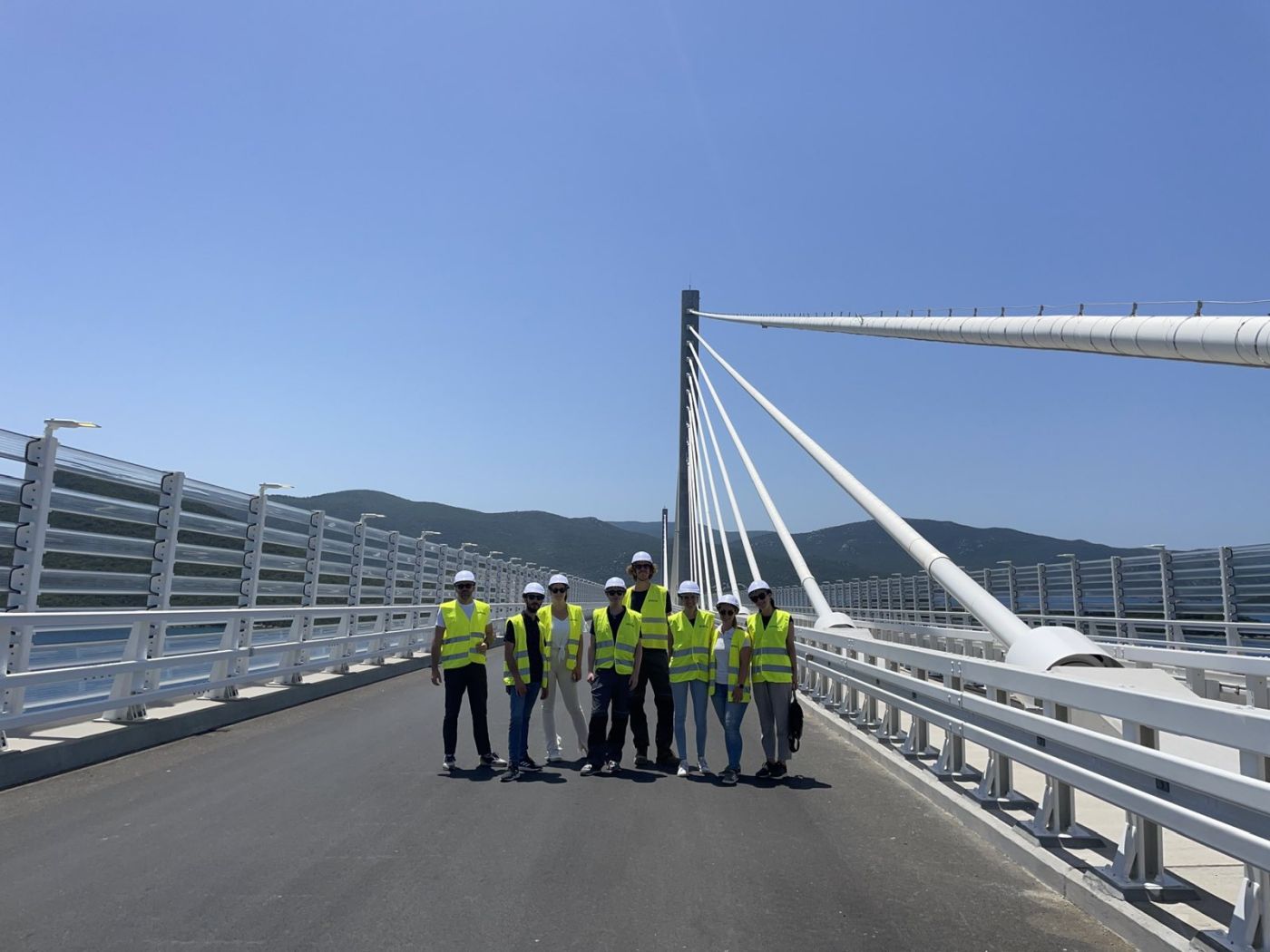 To keep up with the steady and constant company growth and the increasing number of projects we are involved with, we organized a professional excursion to visit the active construction sites in the southern part of Croatia. On our trip, we visited some impressive construction sites for the projects we were a part of, all the while enjoying the breathtaking scenery and the delicious food of southern Dalmatia.

The first stop on our business and pleasure combining excursion was the Port of Omiš, located in the coastal part of the city of Omiš, in the immediate vicinity of the Cetina river. The construction of the Port in Omiš is the largest ongoing port project on the Adriatic. Its completion will change the outline of the city and enable higher quality inshore traffic in the city of Omiš. The reconstruction of the paved promenade and the construction of a pier with docks are planned. To prepare the detailed design for the reconstruction of the port open to the public, we carried out geotechnical investigation works and drafted a geotechnical report. Here we had the opportunity to see the underwater piles with a diameter of Ф = 1200 mm made by the company Texo Molior.

After the port of Omiš, we headed to one of the most demanding ongoing construction projects in Croatia, the construction of the Cetina Bridge between two tunnels, as part of the Omiš bypass (the DC 70-Cetina Bridge-Omiš East section), which will allow traffic to move through the rocky canyon of the Cetina River. The construction is carried out by the company Strabag, and we are taking part in it by carrying out the stabilization/removal of potentially unstable blocks of rock mass. The bridge will be approximately 215.0m long and it will be founded (anchored into the rock mass) at its ends at both tunnel exits.

The construction is carried out by pushing prefabricated material across the canyon, from one tunnel to the other, using an auxiliary structure. This is the first time this technology is being used in Croatia. We are participating in this project by carrying out the stabilization/removal of potentially unstable blocks of rock mass that could endanger the construction of the bridge and the existing section of the state road DC 70 Omiš-Naklice-Blato junction passing under the canyon.

After visiting the construction site, we went to a nearby restaurant, where we enjoyed authentic Dalmatian cuisine, which is known for its variety and rich flavors. In a pleasant atmosphere, our time passed quickly and we soon headed for Ploče and boarded the ferry to Pelješac.

Pelješac is the second largest Croatian peninsula, known for its beautiful nature, crystal clear sea and numerous sights. Residents mostly work in viticulture, olive growing, fishing and tourism. The bigger places are Ston, Brijesta, Trpanj, Viganj and Orebić. We checked into our suites in Orebić and enjoyed the rest of our evening right by to the sea.

The next morning, we sailed towards the nearby island of Korčula, a popular destination of tourists from all over the world. The town of Korčula is a fortified town with a rich history, situated on the east coast of the island of Korčula. The old town is surrounded by walls, and its narrow streets laid out in the shape of a fishbone encourage free air circulation, but protect from strong winds. The old town of Korčula is one of the best preserved fortified medieval towns in the Mediterranean and it has been registered as a UNESCO World Heritage Site. Korčula is believed to be  the birthplace of Marco Polo. In Korčula we used our time to walk around and take some photos of this beautiful town.

Next on our itinerary was the Pelješac Bridge and the construction site of the bridge access roads. The construction of the Pelješac Bridge is the largest ongoing infrastructure project in Croatia. The precondition for the first vehicles to cross the bridge is the construction of access roads—an integral part of the project of connecting southern Dalmatia with the rest of Croatia. We also played our part in this important project: we developed the main and detailed designs of the reinforced soil retaining structures at the positions of the abutments of the Dumanja Jaruga Bridge, the Doli wall and the Brijesta section as part of the access road construction the Pelješac side. The works are carried out by the company Strabag.

After the access roads construction site, we crossed over the newly built Pelješac Bridge and witnessed its really impressive appearance and size, and this truly made us really proud The bridge was given an official name “Pelješac Bridge” (“Most Pelješac”), and this was also the name of the project from the very beginning.

Because the construction sites we visited are far away, our excursion lasted for two days. Except for education, we spent a part of our journey hanging out, tasting the local cuisine and touring the historic sites.  We are glad to have visited the most significant ongoing infrastructure projects that are bound to change Croatia and increase the quality of life of the residents of those areas.