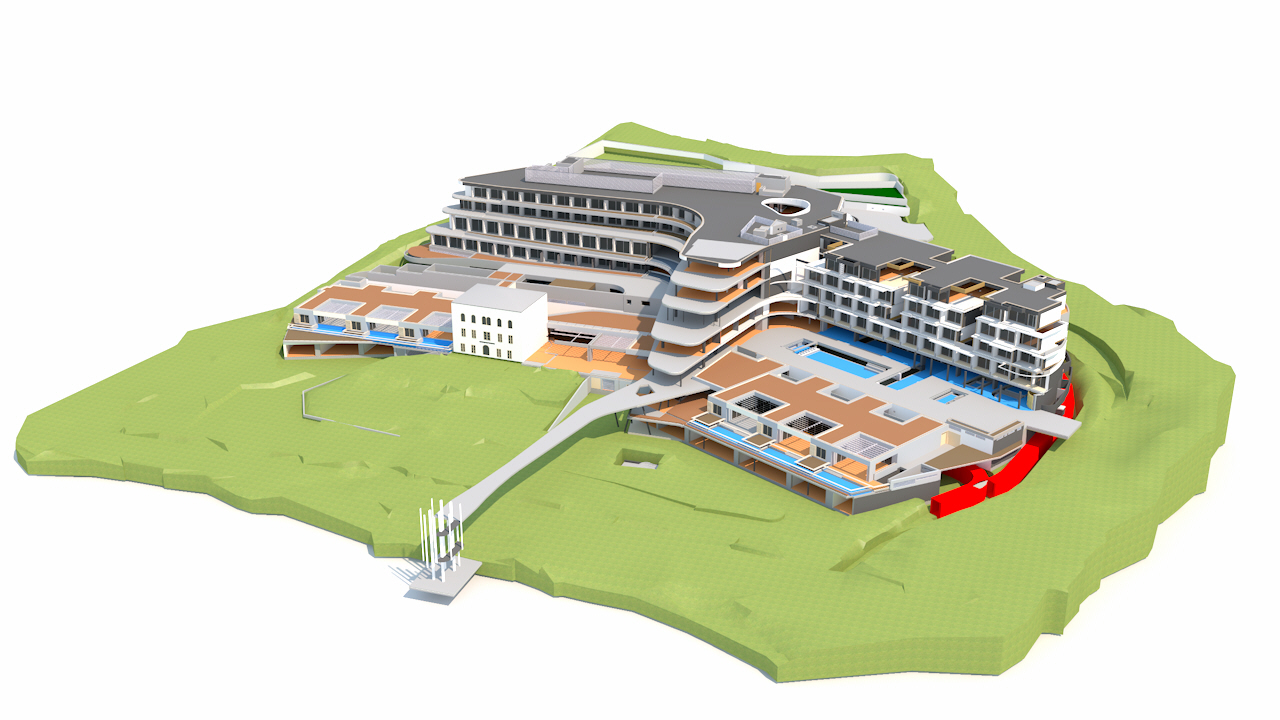 The design includes two spatial units of a total of 7 floors. The first unit is the main hotel building with an underground garage on three floors, a wellness center, a restaurant and congress halls, with accommodation facilities and accompanying facilities designed for 5-star categorization, while the second unit are the hotel annexes with accommodation facilities – apartments on the first floor and business premises on the ground floor. This hotel complex has been designed by ZDL studio, while the project managers are DDG Group d.o.o.

The location of the future Hotel Ičići is specific due to the falling terrain and the significant amount of groundwater (torrent watercourses) in the project area. Given the planned embankment of the building and the demanding geological and urban conditions – the existing roads around the building plot, the torrent watercourses under construction and the existing the building to be reconstructed – it was necessary to form and protect an open pit up to 15.0 m deep and to clean up the foundation soil under certain parts of the existing building in order to make the foundation conditions uniform.

Based on the performed investigation and testing, it was determined that the location is built of cover, which consists of overburden and diluvium above a bedrock of limestone and dolomite.

The hydrogeological investigation has found a constant level of groundwater directly related to sea level, and due to higher precipitation it is possible for this groundwater level to significantly rise because of the ephemeral water courses recorded and located in the affected area.

The open pit protection is divided into a total of five zones, where the boundaries of the zones are defined by the geotechnical characteristics of the location and the excavation geometry.

In general, given the size of the project, the open pit protection is defined only in parts where excavation in a stable geometry was not possible. For the part of the open pit inside the cover, excavation protection is planned by nailing the soil. Nailed soil is performed by installing self-drilling anchors with a diameter of 32.0 mm, length 3.0, 4.0 and 6.0 m, and load capacity 28.0 tons in a general grid of 1.50 m x 1.25 m. Along with the self-drilling anchors, shotcrete is installed in two layers 5.0 cm thick, with a reinforcing mesh Q-188 placed in one layer between them.

For the part of the open pit within the rock mass, vertical excavation protection is planned by installing self-drilling anchors with a diameter of 32.0 mm, length 4.0, 6.0 and 9.0 m, and load capacity 28.0 tons in a general grid of 3.0 x 3.0 m, in combination with shotcrete C 25/30 which is installed in two layers 5.0 cm thick, with a reinforcing mesh Q-188 placed in one layer between them.

Based on the data obtained from the investigation, it was determined that there were favorable foundation soil conditions in terms of load-bearing capacity and deformability at the elevation of the bottom of the foundation dilatation for most of the project. The complete supporting of the dilatation structures D1, D2, D3 and D5 on the bedrock is planned.

The construction of dilatation D4 is partially supported on the layers of the covers, because the investigation and testing data shows the bedrock sinking in the southeastern part of the project.

Since the cover deposits are characterized by less favorable deformability and load-bearing characteristics compared to the bedrock, it was necessary to limit the excessive differential settlement of the D4 expansion slab. In order to eliminate this excessive differential settlement, the replacement of the material under the foundation slab is planned by filling with granular stone material with a granulation of Ø 0-63 mm. The estimated thickness of the replacement layer for the part above the cover is 50.0 cm, and for the part above the rock mass 25.0 cm.

Given the size of the project and the complex geological, hydrogeological and urban conditions at the location, the construction of a new hotel is a complex and demanding project.

During the excavation and open pit protection, it is necessary to perform continuous geotechnical supervision, carry out engineering geological mapping of the open pit and monitor its movement. The measuring equipment, which is used for monitoring, consists of ten geodetic measuring points, one clinometer and two piezometers.

In order to ensure the greatest possible reliability and precision when designing, the project of the open pit protection and the arranging of the foundation soil was made using BIM technology.

The model of the open pit for the Hotel Ičići is shown below: