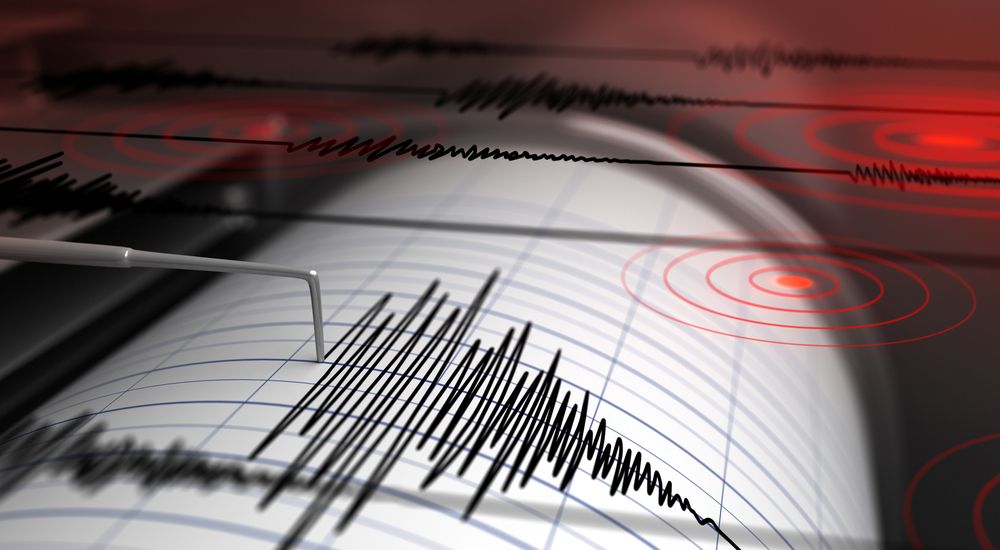 An earthquake is the shaking of the ground surface. It is result of sudden fracture and slippage of brittle rock formation in the Earth’s lithosphere that creates seismic waves. Seismic waves propagate through the earth in all directions. The ground shaking is caused by the waves that reach the earth’s surface.

Shaking of earthquake can damage or destroy buildings, bridges, factories, dams and other infrastructure. It can also trigger massive landslides.

To understand earthquakes and the ground shaking, it is necessary to know the structure of our planet (structure and dynamics of its upper layers). The earth’s crust is the uppermost layer of the earth made of solid rock. The crust ranges in thickness from as small as 5 km beneath the oceans, called the oceanic crust, to as large as 70 km under some mountain ranges, called the continental crust. A common thickness of the continental crust is around 40 km. Below the crust is mantle, a relatively solid rocky layer around 2900 km thick. Below the mantle it is the outer core, a molten metallic layer, and in the center of the earth is the solid iron-reach inner core.

The crust and the upper layer of the upper mantle down to approximately 100 km are called the lithosphere which is composed of tectonic plates, and the earthquakes occur within this zone.

The waves that reach ground surface cause the ground shaking that is responsible for most of the damage during an earthquake.

There are different types of waves that can propagate through rock and soil. Body waves can travel within the medium, in its interior, while the surface waves develop and propagate on the free surface of the medium. The same type of wave will propagate faster through a stiffer elastic medium. Since the rock and soil are stiffer in compression than in shear, the compressional seismic waves (P-waves) travel faster through the ground than shear waves (S-waves).

Earthquake ground motions and corresponding accelerations vary from earthquake to earthquake. Durations of shaking may range from a fraction of a second, involving only a few cycles of acceleration to several minutes. Characteristic frequencies have been observed to be as high as about 15 Hz, and as low as 0,5 Hz. The largest recorded horizontal accelerations have been about 1.25g.

The potential of a ground motion for damage of supported structures is a complex function of the amplitudes, frequency and duration of shaking. The ground motions will depend on how the waves traveling to the ground surface have been originated at their source, shaped along their path thorough deeper, stiffer and rather uniform geologic deposits, and altered along the final path through the shallow deposits at the location which are relatively soft and often nonuniform.

In the 1985 earthquake in Mexico City, more than 15,000 people died due to a magnitude 8,0 earthquake beneath the coast of Michoacan, more than 450 km away from the city. Amplification of ground motion due to local soil conditions occurred during the earthquake.

During the 1985 earthquake in Mexico City, the strong ground shaking lasted for approximately 60 seconds with peak acceleration of 10 to 15% of gravity. Early surveys indicated 179 buildings had collapsed and an additional 85 were in danger of collapse. The interaction with the underlying soils from the old lake bed gave the response of many buildings near resonance characteristics.

The acceleration record obtained on rock and stiff soil exhibits small accelerations, while the records obtained on deep soft clay deposits exhibit accelerations that are 4 to 5 times larger and have somewhat different frequencies.

Damage surveys showed that virtually all the structures which collapsed or suffered major damage in the Mexico City earthquake of September 19, 1985 were in zone with the depth to the hard layer from about 26 to 44 meters. On the shallow soil deposits to the west and south, and on the deeper clay deposits to the east and north, damage was relatively minor. The major damage in the heavy damaged area occurred to structures with story heights ranging from about 6 to 18 stories.