Laboratory testing of rock mass strength I Geotech d.o.o. I 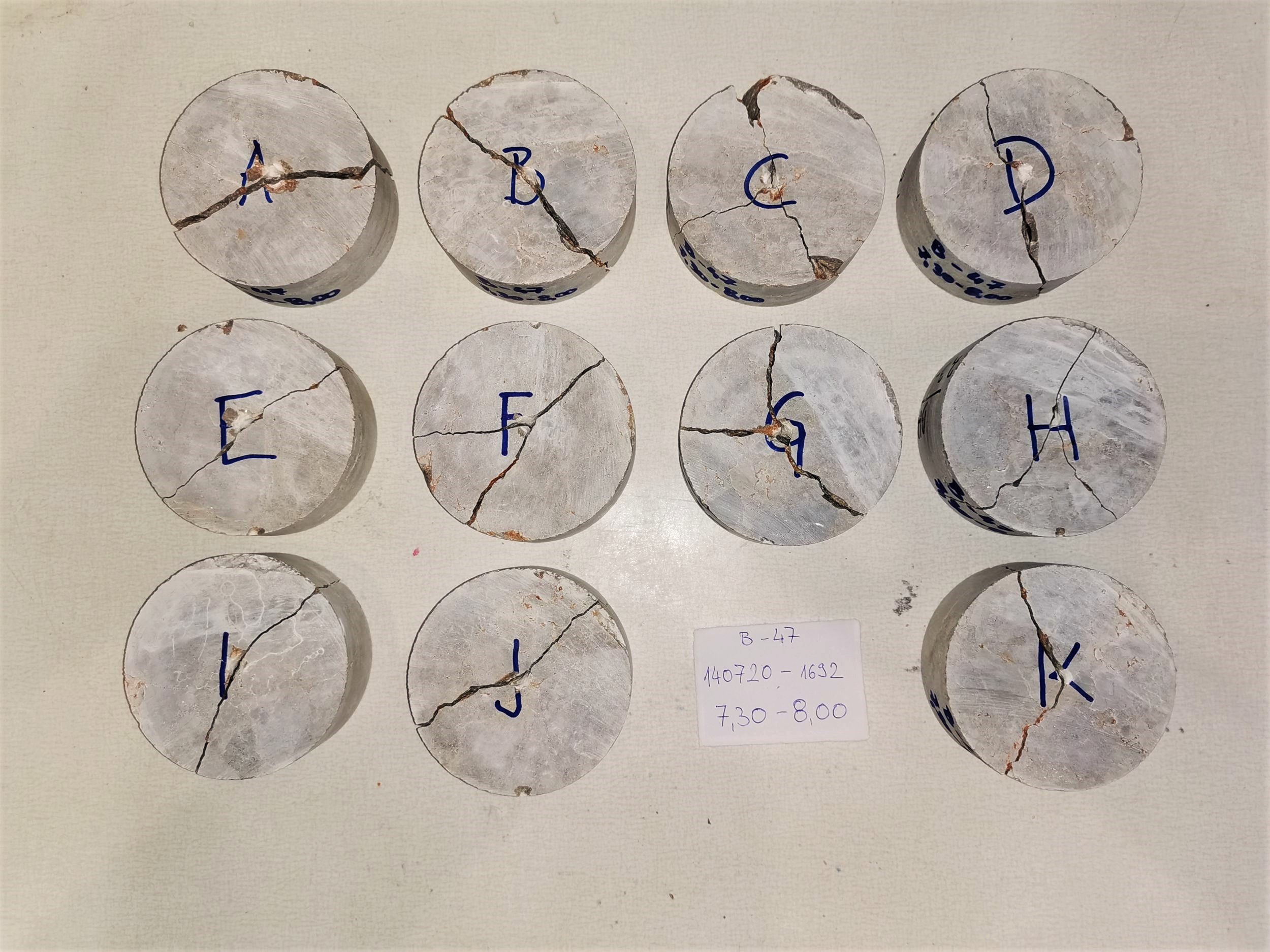 Laboratory testing is one of the most important segments in the study of rock properties and behavior in different conditionst is an integral part of geotechnical exploration and investigation works. There are several methods of laboratory testing of rock mass strength, and the most important are UCS (Uniaxial compressive strength), PLT (Strength index determined by the loading procedure at the point) and the Brazilian test (Tensile strength of rocks).

We distinguish between three strengths within the rock mass:

Uniaxial compressive rock strength (UCS) is a mechanical property defined as the maximum stress in one direction with free lateral expansion at which material fracture occurs. Stress is expressed in MPa and defined as the force (N) acting per unit area (m2). At the moment of fracture, the mineral grains and the pore space of the sample crack, move, bend and deform.

Uniaxial compressive strength can be represented by the expression:

In accordance with the recommendations of the International Society of Rock Mechanics (ISRM), the tests are carried out on cylindrical samples of regular dimensions with a height to diameter ratio of 2.5–3.0: 1.0 and with a diameter preferably not below 54 mm. The sample diameter should be at least 10 times the average grain size.
The number of samples to be tested should be five a minimum. The sample bases must be free of irregularities greater than 0,02 mm, and perpendicular to the mantle which must not have any irregularities greater than 0,25 mm. The load on the sample should be applied continuously, in such a way that breakage occurs within 5 to 10 minutes from the beginning of the stress. The continuous load increment is from 0.5 to 1 MPa.

The principle of uniaxial compressive strength testing is shown in Figure 1, while the characteristic types of fractures are shown in Figure 2. Fractures can be shear, tensile, shear-tensile and plastic.

Tensile strength of rock material is usually defined as the maximum tensile stress that this material can withstand. Rock material usually has low tensile strength, and its determination can be carried out by direct and indirect procedures. The most known is the Brazilian test (Briševac et al., 2015).

The Brazilian Test is a laboratory test conducted in rock mechanics to indirectly determine the tensile strength of rocks. The rock is exposed to a compressive load in such a way as to cause tensile stress on the rock sample. The result of the Brazilian test is the tensile rock strength (σBTS) shown by the formula:

In accordance with the ISRM, the tests are performed on a cylindrical sample having a diameter of no less than 54 mm and a thickness that is approximately equal to the radius of the sample. The unevenness of the cylinder mantle must not exceed 0.025 mm. It is recommended to take at least 10 test samples for one type of rock, i.e. 10 test samples are formed from one sample. The load on the sample should be continuous with a constant increment so that fracture occurs within a few minutes. The load gain depends on the strength and size of the sample, and varies between 10 and 50 kN/min. The principle of testing is shown in Figure 3.

Strength index determined by the loading procedure at a point

The point load strength index (PLT) is an index method for determining the rock strength at point load, shown in Figure 5. PLT is designed as an index test to classify rock mass directly or in correlation with uniaxial compressive strength. The test result is the strength index Is (50) (MPa) shown by the formula:

The principle of the PLT test consist of breaking the rock samples by applying a concentrated load over a pair of rounded conical spikes.
If the rock sample is in the shape of a core, then the diametrical and axial tests are performed. If it is in the shape of cut blocks or it is irregular, a “block test” or a test of irregular samples is performed. Testing is possible in the laboratory and in the field. The most accurate results are obtained with a sample diameter of 50 mm. The standardized portable device is ideal for quickly performing experiments on boreholes directly in the field.