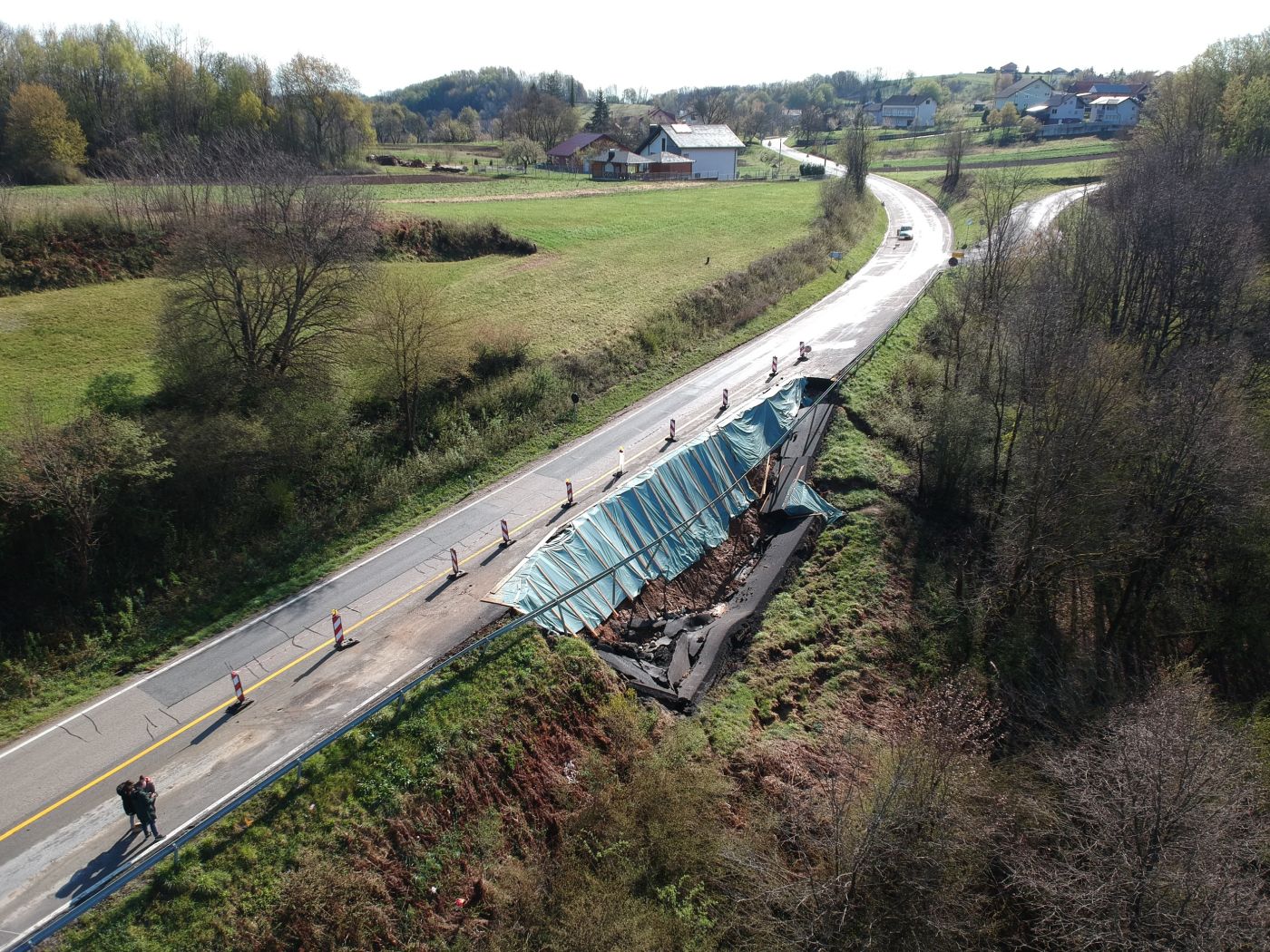 The remediation works on the Dubravci landslide, located on state road DC3, section 012, at km 4+400 in Karlovac County, have been completed. For this project, we carried out the engineering geological and geotechnical investigation and testing and made the main and detailed landslide remediation designs.

We also carried out the complete supervision of the remediation during the works. This included the analyzing and verifying the situation in the field and adjusting the design.

The Dubravci landslide is located west of the Dubravci town, on state road DC3, section 012 at km 4+400, in Karlovac County. The DC3 runs in the general northwest-southeast direction on the investigated part of the section, and it crosses the natural slope with an inclination of approx. 25° to the southwest. The route of the road was made by partially cutting and filling the existing terrain, which formed cuttings along the left edge of the road and embankments along the right edge. The existing embankments and cuts were unprotected before the remediation, with no retaining structures. Along the left edge of the road, there were unorganized channels for storm water drainage, which diverted the water towards the existing concrete culvert. Numerous layers of asphalt and repaired cracks were found on the existing road, which indicated a systematic sliding of the material over a long period of time. The elevations of the terrain range from approx. 175.0 to 191.0 m.a.s.l., while the elevations of the road within the catchment range from approx. 185.0 to 190.0 m.a.s.l.

In December 2020, the earthquake in Banovina activated the sliding of already unstable road material and caused a crack of a height of approx. 3.5 m to open. An inspection in the field found that the landslide had progressed; this was evident from the additional material settling, accumulation climbing in the reservoir in the southeast direction, water seeping at the bottom of the reservoir, terrain dredging and trees leaning.

For the main and detailed landslide remediation designs, we carried out engineering geological and geotechnical investigation and testing that included:

The remediation design for the Dubravci landslide on state road DC3, section 012, at km 4+400, included works aimed at increasing the overall stability of the slope, constructing a rainwater drainage system, and reconstructing the road. Landslide remediation included implementing the following remediation measures:

Before the works could begin, the existing steel buffer fence and the vegetation, the bushes and trees, were removed from the site. After these were cleared, the positions of the slope protection measures based on project data were staked and marked (height and position).

In order to protect the central part of the landslide, a pile wall of reinforced concrete drilled piles with a length of L=10.0 m in two rows at an axial distance of 2.50 m in the longitudinal and transverse directions was constructed. After the construction of the piles, a layer of mechanically stabilized granular stone material with a granulation of Ø 0–63 mm and a thickness of 75.0 cm was laid. A geogrid was embedded inside the stone material.

In the next phase, a Terramesh system was built to protect the central part of the landslide. The gabion baskets with the dimensions 1.0 x 1.0 x 2.0 m are made in five rows. The total length of the Terramesh system was 4.0 m, and the geotextile was laid on the back face of the gabion.

During the works, a pile integrity test (PIT) was conducted on all the piles. A total of 54 piles were executed on the landslide (the central part and the sides of the landslide).

In order to monitor displacement during the road construction, three inclinometers of L=12.0 m were installed. A total of ten inclinometer measurements are planned (one measurement every three months).