Why the Tower of Pisa commence to lean? | Geotech d.o.o. 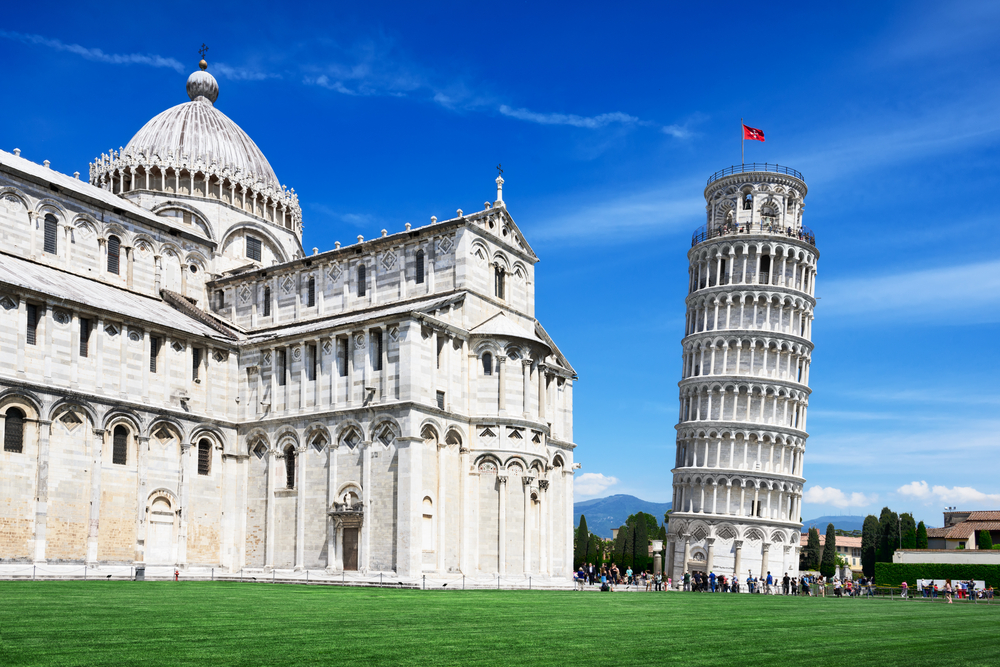 Why the Tower of Pisa commence to lean? And how the inclination was stabilised?

The Tower of Pisa is the bell tower of the Cathedral and it is one of the monuments within the medieval Piazza dei Miracoli. Its construction began in 1173 and it was continued (with two long interruptions) for about two hundred years until 1370. The construction process can be seen in the illustration below. 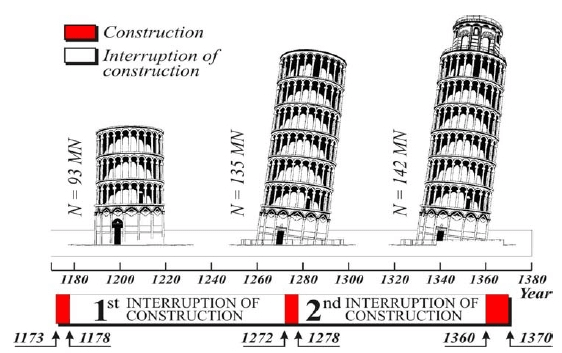 As you can see from the illustration above, the leaning of the tower southwards began during the second construction stage. Thereafter its inclination continued to increase. The image below shows the cross-section through the Tower in the plane of maximum tilt as it was in 1993 before the stabilization work commenced. 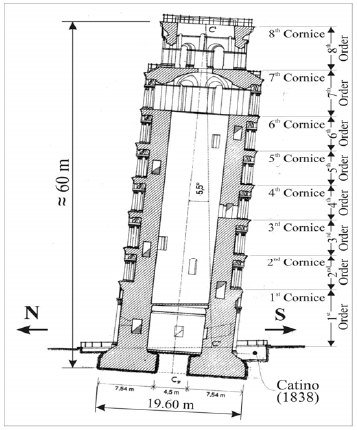 The cause of the lean is the underlying soft estuarine deposits in horizon A (shown in the illustration below) on which the tower is built on. The horizon A is more compressible on the south side because of the fluctuating ground-water level due to seasonal heavy rainstorms. 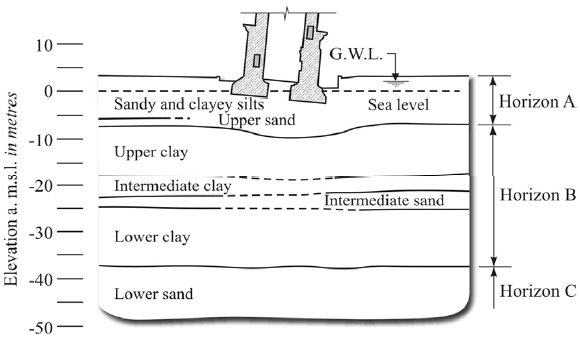 Temporary stabilisation of the foundation was achieved during the second half of 1993 by the application of lead weights on the north side of the foundations which caused a reduction in inclination and more importantly, it reduced the overturning moment by about ten percent. In September 1995 („Black September“) additional attempts to stabilize the tower unfortunately increased the lean and almost caused the Tower to collapse. Finding a method of reducing the inclination was far from successful.

After a number of initial attempts, the final measure of correcting the Tower’s tilt was chosen, the correction was consisted of the gradual extraction of the soil from the lower part of Horizon A, on the northern part of the tower. This method, known as under-excavation, involves installing a number of adjacent soil extraction tubes just beneath the north side of the foundation.

Preliminary under-excavation that was carried out in February 1999 over a limited width of 6 m north of the Tower using twelve boreholes was successful. This method persuaded the Italian Committee that it was safe to undertake soil extraction over the full width of the foundation.

Accordingly, between December 1999 and January 2000, 41 extraction holes were installed north of the Tower at a 0.5m spacing between each other with a dedicated auger and casing in each hole.

The final result of the full under-excavation and of the additional measures implementations of the groundwater control in Horizon A, was the reduction of the Tower foundation in mid-2002 by 1880 arc seconds – about 10% of the maximum value reached in 1993.
In the succeeding six years, the Tower has continued rotating northwards at a reducing rate. By the September 2008 the accumulated reduction of the foundation tilt reached 1948 arc seconds. In two years, from September 2006 to September 2008, the residual rate of rotation northwards has reduced to less than 0.2 arc second per year.

Figure 8. Rotation of Tower foundation as result of stabilization works

The question is how the Tower will behave in future? The most pessimistic scenario assumes that the time period needed for the Tower to return to its 1993 inclination will be at least 200 years. Finally, it should be emphasised that thanks to the noninvasive nature of the under-excavation, at any time in the future, this kind of intervention can be repeated to reduce the tilt of the foundation by the required amount.