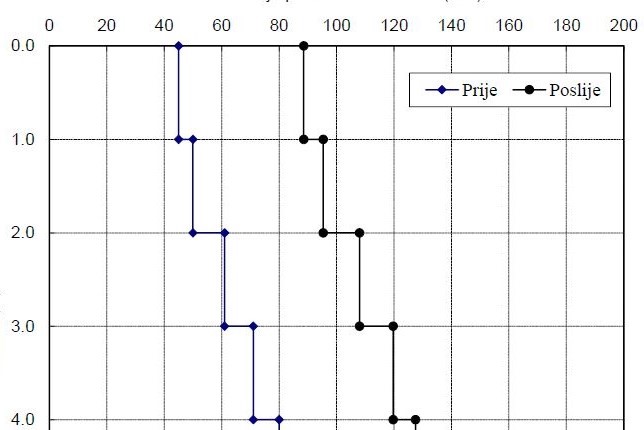 What is foundation soil improvement?

Soil improvement includes a range of compaction and mixing technologies of the existing and new soil in which the natural soil transforms into a new material.

Soil improvement can be performed with the use of a range of different technologies. In the selection of a suitable soil improvement technology, a number of factors must be taken into account, with the most significant being the following: soil improvement goal, degree of increase in stiffness, load bearing capacity or permeability, depth and total volume of the soil being improved, soil type and its mechanical characteristics, availability of materials for the improvement (sand, gravel) and expenses.

As part of the project for the modernization of the railway line R201 Zaprešić – Zabok, foundation soil improvement is performed using stone columns. Stone columns are installed by the deep vibro replacement method, whereby the material is pressed into softer soil creating new base permeable volumes in pile form. The construction material for stone columns is gravel or crushed stone with granules of 16/32 mm. 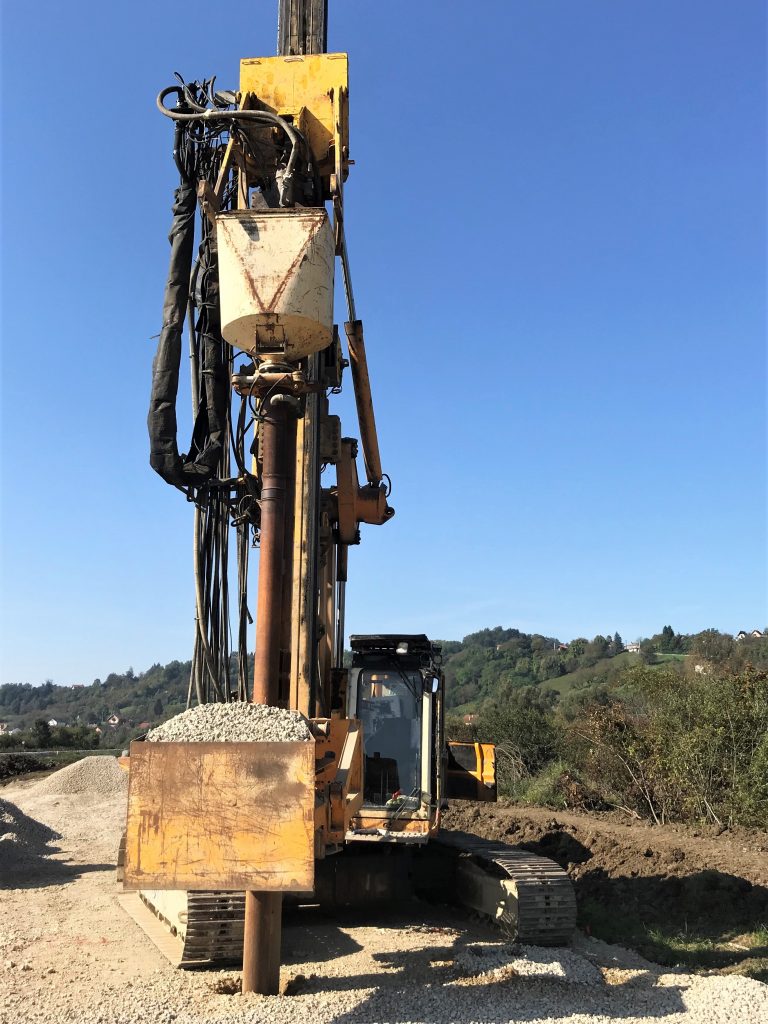 This method directly improves the soil which, by compacting energy and by inserting the material of the gravel, compacts, strengthens, hardens and makes the soil more permeable. The function of stone columns is primarily to accelerate the consolidation of cohesive soil. The columns operate as vertical drains. The execution time is short, and the procedure is extremely adaptable to field conditions.

Significant attention, when performing soil improvement, is given to the quality control of the achieved improvement.

The complex state of stress and interaction between the stone columns and surrounding soil prevents local testing of components.

In order to determine the degree of soil improvement, it is necessary to conduct tests which will include a higher volume of improved soil and determine its average newly created stiffness properties.

The average increase in soil stiffness using stone columns can be successfully and reliably carried out using the non-destructive process of Spectral Analysis of Surface Waves (SASW).

By way of this process, the shear module profiles (G) of the soil can be measured for depth, at very low deformations prior to and after soil improvement. The ratio of shear modules, post- and pre- improvement, represents the degree of soil improvement which is then used as a measure of the success of the performed works. 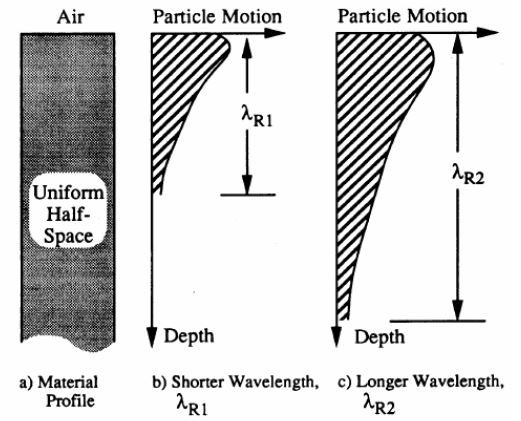 The process is divided into three parts:

The fundamental task of the surface-wave generator is to generate a wave with as great a frequency range and wave energy as possible using a mechanical impact. In addition to this, a greater load is needed to move deeper layers, those requiring lower frequencies, than for layers closer to the surface which require higher frequencies.

Vertically polarised geophones are used to measure the velocity of a passing wave.

A mitigating circumstance is the fact that this method uses phase shift between two receivers as a measurement result, and not the amplitude which is much more sensitive to errors in measurement.

The analogue-digital converter is essential in order for the analogue signal to be received by the receivers, digitised and turned into a signal that the computer is capable of converting, storing and processing. 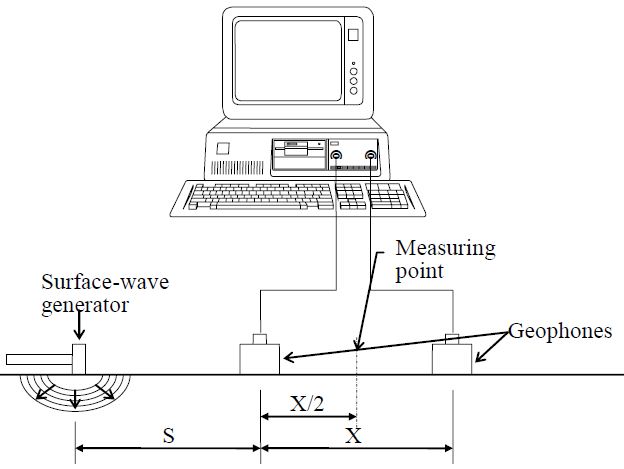 The dispersion curve represents the correlation between the surface wave velocity and wavelength. For every sensor interval, the recorded  signals from both receivers x(t) and y(t) are transformed from a time into a frequency domain producing frequency signals, X(f) and Y(f). This is done using the Fast Fourier Transform (FFT). Further spectral analysis is performed on these transformed signals.

In a layered medium where stiffness varies with depth, the inversion process is necessary in order to derive the depth-based shear wave velocity profile from the field measured dispersion curve. 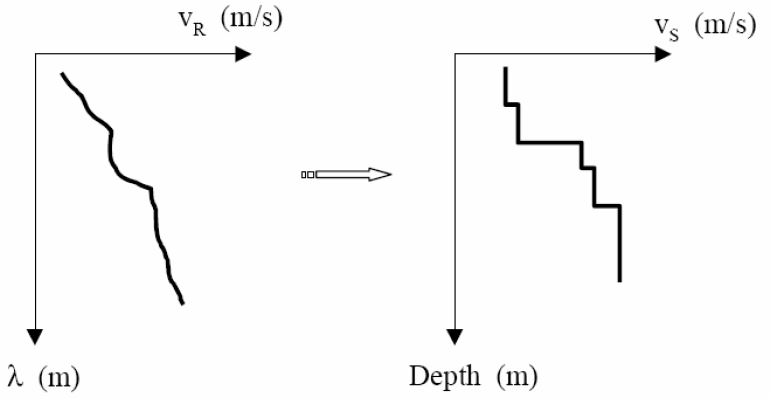 The usable results of this dynamic measurement are:

– Shear wave velocities (vs) by depth; 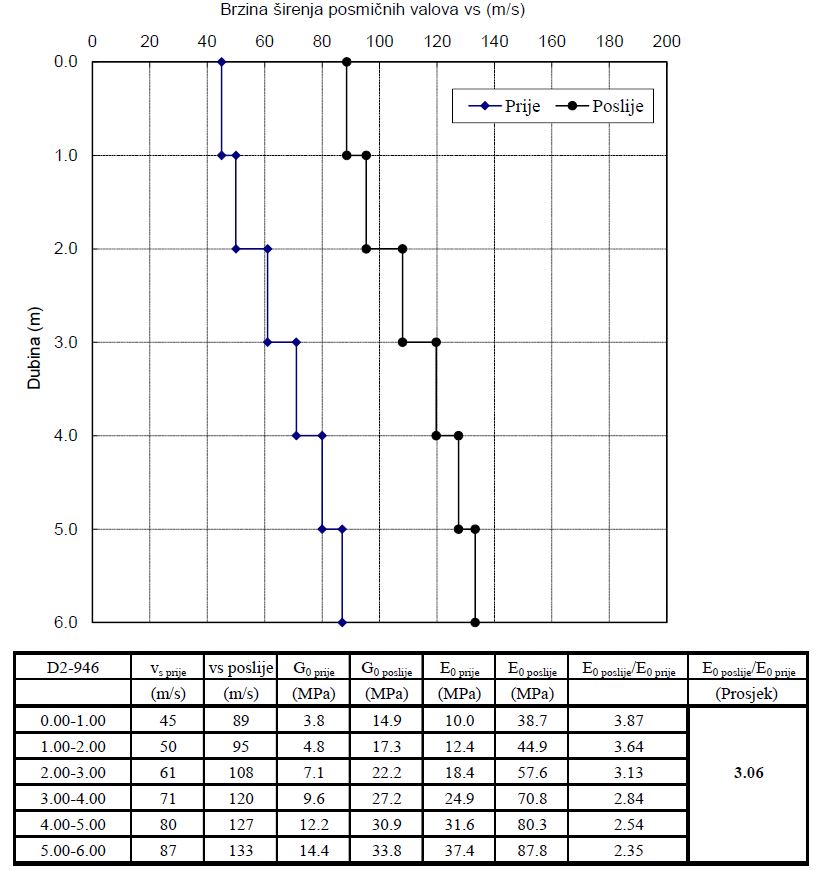