Prop loads in embedded retaining structures I Geotech d.o.o. I 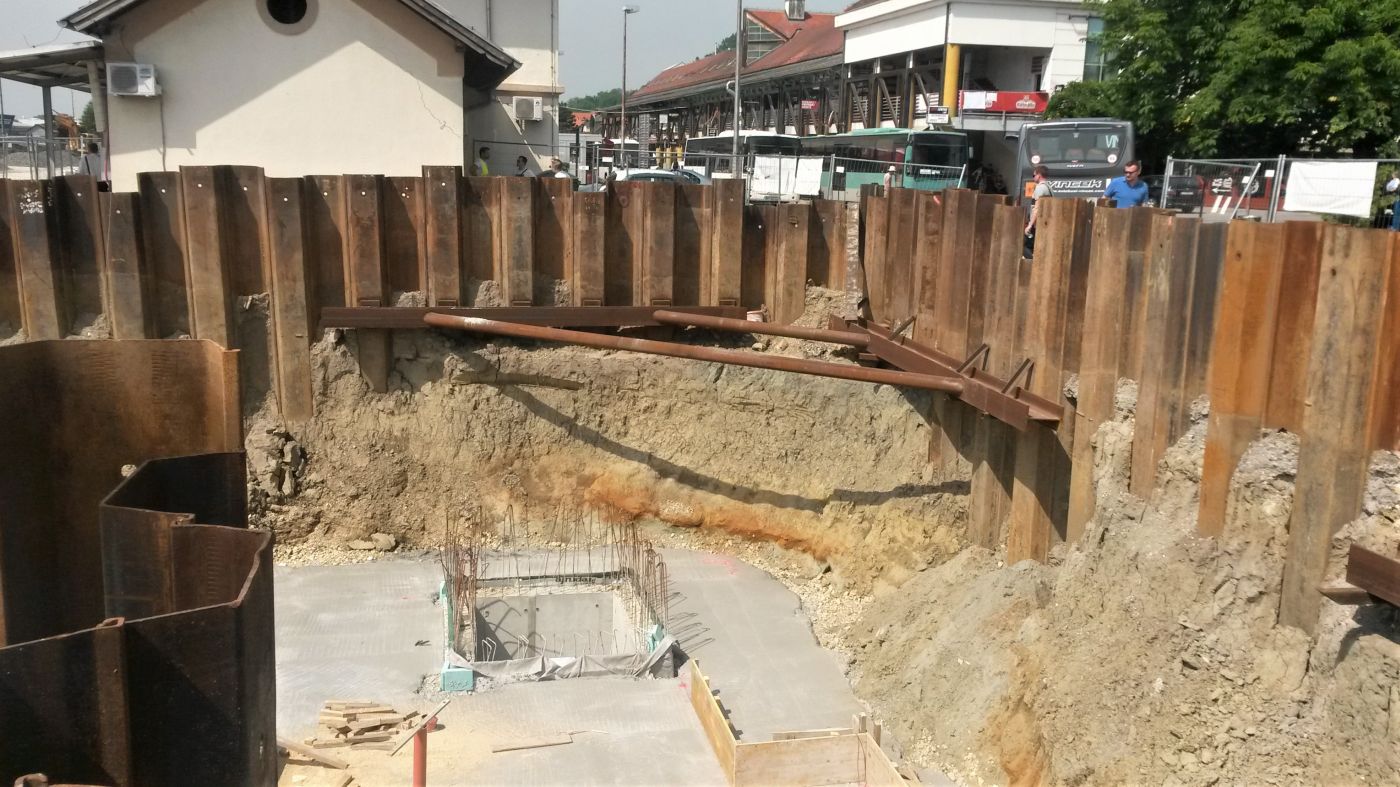 For smaller open pit depths it is possible to use embedded retaining structures without additional protection (cantilever load transfer) but for larger depths, it is necessary to support the retaining structure with additional structural elements such as props, anchors or slabs of the future structure.

The increasing demand for underground constructions in urban areas highlights the need for achieving more economic design of retaining structures. The requirement of limiting ground movements and the need to ensure that no failure of the support system occurs is an important factor in design.

An embedded retaining structure must be designed in accordance with Eurocode 7 and the associated national annex.

Different analysis methods are used for the design of the retaining structures and support system.

In limit equilibrium analysis the equilibrium of the wall is assessed under the action of assumed lateral pressure distributions, usually based on limiting (active and/or passive) lateral earth pressure coefficients. Limit equilibrium methods are directly applicable for some structures (cantilever walls) than others (multi-propped walls).

In the simplest soilstructure interaction analyses, the wall is modeled as a beam and the ground as a series of horizontal springs (subgrade reaction method) or as an elastic continuum (pseudo-finite element method). This analyses calculate wall movements, bending moments and prop loads, but not ground movements around the wall. Props are generally modeled as springs or point loads.

These soil-structure interaction analyses model the ground and the wall and its construction sequence, using a finite element or finite difference methods.
Ground movements, wall movements, bending moments and prop loads are calculated.

Empirical methods have been used for embedded wall design and, in order to obtain the design prop forces for multi-propped walls. There are a of empirical graphs – Terzaghi & Peck (1967), Peck (1969), Twine & Roscoe (1999) that can be used.

The design load acting on the props will depend upon the analysis method adopted for the design of the wall. Prop loads calculated from limit equilibrium analysis may be unconservative, as the effects of soil-structure interaction are not included.

The DPL method for calculating prop loads for propped temporary excavations is based on the back analysis of field measurements of prop loads relating to 81 case studies, of which 60 are for flexible walls (steel sheet pile, king post walls) and 21 are for stiff walls (contiguous, secant, diaphragm walls). The case study data relate to excavations ranging in depth from 4 m to 27 m, typically 5 m to 15 m in soft and firm clays (soil class A), 10 m to 15 m in stiff and very stiff clays (soil class B) and 10 m to 20 m in coarse-grained soils (soil class C).

The following pressure diagrams may be regarded as realistic for single propped walls:

The following pressure diagrams may be regarded as realistic for double propped walls:

The following pressure diagrams may be regarded as realistic for triple or multiple-propped walls:

Steel sections are commonly used for temporary props. The design load acting on the props will depend upon the analysis method adopted for the design of the wall. Soil structure interaction methods allow stress redistribution and provide more realistic values of prop loads. The calculated prop loads should be compared with those derived from comparable experience.