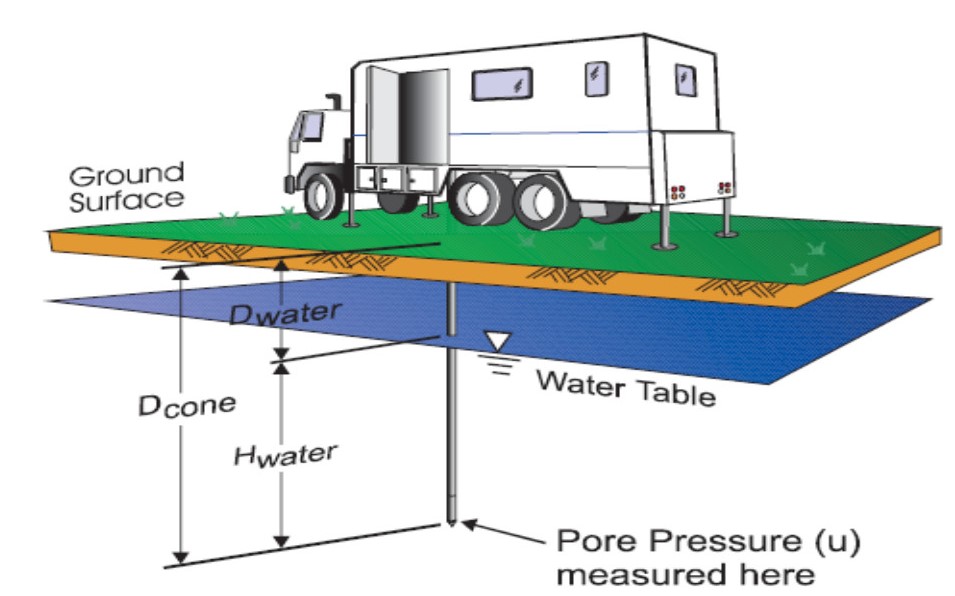 The main purpose of CPT (CPTU) testing is to identify subsurface conditions: classify soil, detect layers and measure strength, determine deformation characteristics and the permeability of foundation soils. This is done mainly on the basis of empirical correlations, and also partly on the basis of theoretical outlines.

The CPT experiment is performed by pressing the pointed probe into the soil vertically using pressing rods. The pointed probe must be pressed into the soil at a constant speed. It is necessary to measure the resistance of the pointed probe with pore water pressure () and, if appropriate, the local friction sleeve on the probe (between the friction sleeve and the surrounding soil).
In addition to friction resistance and friction on the sleeve, it is possible to measure the water pressure (CPTU) and collect data on seismic waves (SCPT).

Equipment for CPTU testing consists of:

The main parts of the CPTU probe are cone, friction sleeve and filter – pore pressure sensor.

The probe cone is the shape of a cone with a 60° angle slope and a base surface of, most commonly, 10 or 15 cm². The standard size of the cone is 10 cm², while 15 cm² cones are used when additional sensors are installed on the probe. The surface of the friction sleeve above the cone is 150 cm².

The equipment used for probe pressing usually consists of a hydraulic crane and a soil response system. The maximum permissible pressing force for diameter d = 35.7 mm (10 cm²) is 20 tons (200 kN). Excessive force may result in damage and/or deformation of the test tubes, both in the device itself and in the softer surface layers.

For testing in hard soils, it is necessary to carry out pre-drilling to avoid overload and probe damage. When a CPTU test is performed, it is necessary to fill the borehole from the pre-drilling with water at least to groundwater level, in order to ensure the saturation of the probe filter. Pressing equipment must be positioned in such a way as to ensure that the pressing position is as vertical as possible. The deviation from the initial pressing direction must not exceed 2°, and the pressing tubes must be checked to ensure they are straight.

The results obtained by friction provide us with on soil type. CPT is a great way to profile layers or detect layer changes, to show differences between layers and to reveal very small inlays in the soil. The CPT is a method of measuring and determining the characteristics of soil (from soft silts, clays to rough cohesive soils). Some probes are equipped with geophones for measuring wave velocity, and the results are read on the surface. After analyzing the research results, we can determine the soil type and the design of the shallow foundation by estimating the rigidity and cohesive soil strength. CPT (CPTU) result interpretation is mainly based on empirical correlations. Many parallel tests have been used in Croatia already, so the used forms correlate well with other tests.

When using a CPT at a new location, it is necessary to check and correct the empirical connections. The results obtained by the CPT test can help us with designing the foundation piles in sand and gravel, and also, although very rarely, in foundations in clay.

The CPT testing has some disadvantages, such as less accurate data and limited application possibilities (soft soils only). However, CPTU testing is recommended for obtaining data on soil types with the possibility of additional water pressure measurements to distinguish undrained layers (clays, silts) from mostly drained layers (sands, gravels).

On-site work is becoming increasingly more important in comparison to laboratory work, giving more realistic results or even results from a specific site where some type of construction is planned.
The static penetration experiments will continue to develop, perhaps at an even faster pace, with the help of developing IT technology – various software solutions will be able to help with calculations and give more accurate results. In addition, research equipment such as probes and penetrometers will continue to develop, and may with time become more robust. CPTU testing will become a common soil classification test and mechanical parameter provider. CPTU testing has already been more commonly used over the last twenty years. Higher data accuracy and better education of geotechnical engineers help lower the possibility of research or construction mistakes, thus increasing the safety of a construction project.