A case of foundation soil failure - the Transcona grain elevator 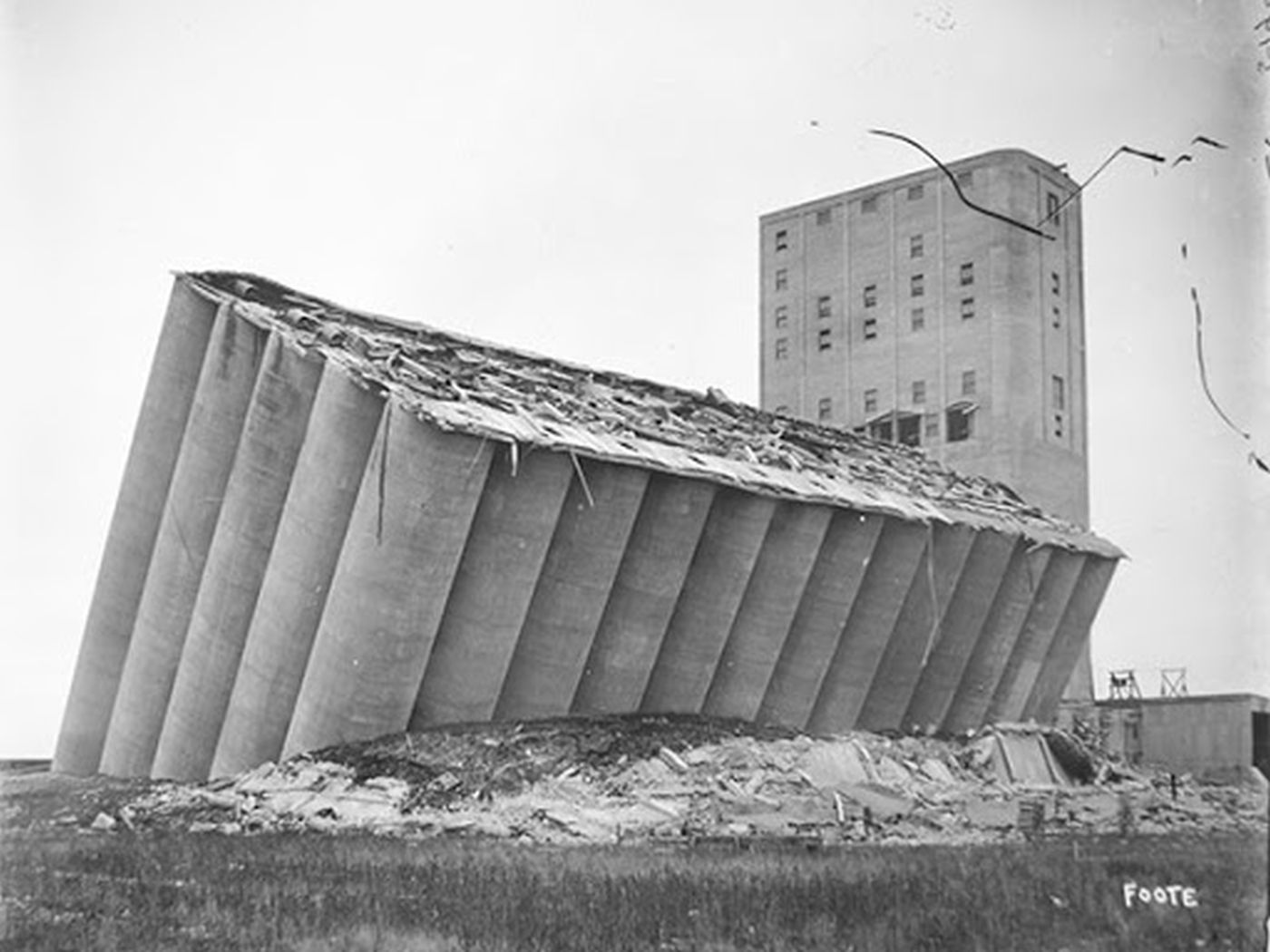 A case of foundation soil failure – the Transcona grain elevator

The Canadian Pacific Railway Company built the Transcona grain elevator near Winnipeg, Canada in 1913. The warehouse was designed to store grain from the city of Winnipeg and the wider area. Winnipeg, being located at the intersection of roads connecting the east and the west of Canada, developed one of the largest grain markets in the world.

According to available data, no detailed geotechnical investigation and testing was conducted before works began. This information is not surprising given the available expertise and experience in geotechnical engineering at the time.

Excavations for the foundations began in 1911. During the excavation, it was determined that the first 1.50 m of soil consisted of soft clay, and that underneath it was a relatively stiff clay commonly known as “blue gumbo” in the area.

At a depth of 3.70 m, an “in situ” plate compression test was carried out. The interpretation of the results and the correlations at the time indicated that the foundation soil could accept a uniform load of 400 kPa. The maximum soil stress at maximum load was estimated not to exceed 300 kPa, so the conducted test was satisfying.

In addition to the performed tests, it was assumed that the stiff “blue gumbo” clay at the site had similar characteristics and depth as at the sites of other complex buildings built in the surrounding area.

After the construction was completed, the tanks were evenly filled with grain. When the tanks were filled up to 87.5%, large settlements of the storage building were noticed. Within one hour, the settlement increased to 300 mm with a slope to the west, and within 24 hours the foundation soil collapsed, and the structure tilted about 27 ° (Figure 2).

Immediately after the accident, several deeper exploration boreholes were drilled. The samples taken were not laboratory tested, however, soil classification was conducted using optical observation. It was concluded that the soil was a uniform layer of clay, which confirmed the previous design assumptions, and that this was also the geological structure of the wider area.

The conditions of construction, the load under the foundation structure and the geological structure of the Transcona grain elevator were similar to those of the surrounding buildings in the wider area. However, this structure had a much wider foundation, and thus the impact of the load on the foundation soil was much deeper.

The problem with the original geotechnical investigation and testing was the application of inadequate methods of deep investigation–no deep exploratory boreholes were drilled and there was no data on deeper (and poorer) soil layers. The circular plate of the soil load-bearing device (PLT test) is small in diameter and cannot give satisfying results at greater depths below the level of the foundation slab.

Engineers in charge were guided by the assumption that the soil was homogeneous, with the parameters of the upper layers of stiff clay having a significantly higher bearing capacity than the lower layers. Guided by this assumption, the designers calculated the allowable load of 321 kPa, which was then more than the actual load on the structure. However, the load from the structure under the foundation also affected the lower, softer layer of clay, which has a much lower load-bearing capacity. According to today’s investigations, when the lower layer with the lower parameters is taken into account, the permissible load is only 251 kPa, which is lower than the actual load (291 kPa).

In short, the collapse of the soil would not have occurred had deeper investigations been carried out and had the parameters of the lower layer of clay been known during the design phase. To conclude, it is crucial to determine the positions and the depth of investigation and testing correctly, especially for exploration boreholes.

After the accident, remediation was carried out by the Foundation Company Limited. Works consisted of building supporting structures, gradually excavating the foundation slabs and building the piles in order to return the building to its original condition. The Transcona grain elevator was purchased by the Parrish & Heimbecker company in 1970 and still exists today. It is still in operation today, under the name Parrish & Heimbecker Grain Elevator (Figure 5).