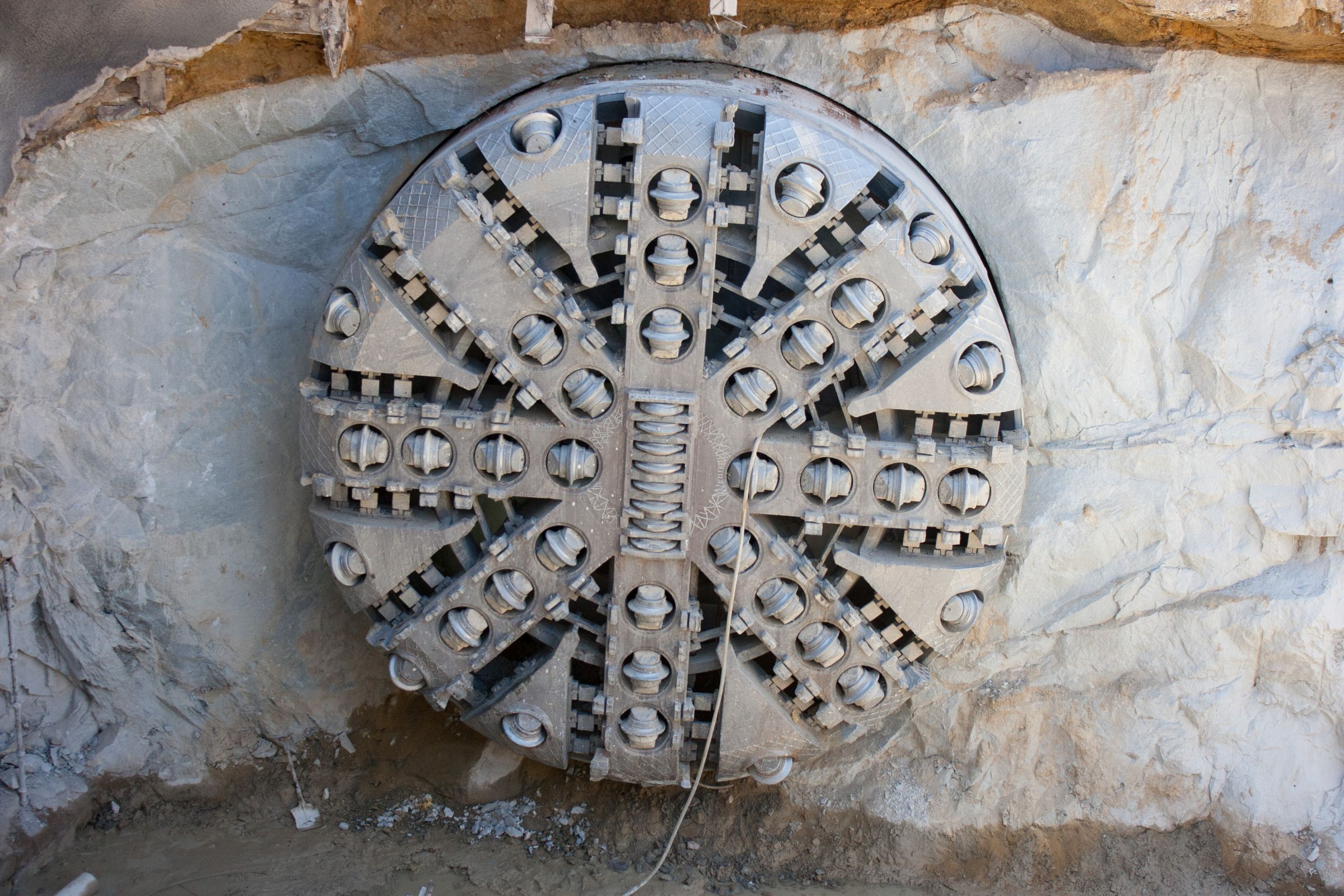 Today’s transport infrastructure development requires the construction of very long tunnels, which is why tunnel boring machines – TBMs – are becoming more popular. Tunnels enable us to overcome natural obstacles and shorten our journey, which is a very important factor in the fast-paced time of today.

The tunnel boring machine (TBM), also known as the ‘mole,’ is a machine used to excavate tunnels, primarily through strong rocks, but is also used for weaker rocks and soils. The machine’s most important part is a rotating cutting wheel with a diameter between 1 meter (micro-TBM) and 19 meters. The cutting wheel at the front uses hydraulic cylinders to press ahead into the tunnel face. Inside the cutting wheel there are disc cutters and scraping tools used to loosen up the material.

The loosened material is removed from the cutter head via screw conveyor, which clears the material through the back of the TBM and out of the tunnel via conveyor belt. The machine consists of an entire system used to install supporting elements, a system for drilling and installing anchors. Their length can range up to 200 m.

It is believed that the machine needs to be given a female name to protect the workers underground. It’s a tradition dating back to the 1500s when miners – and anyone working with explosives such as armorers and military engineers – prayed to Saint Barbara to protect them from the dangers of working underground. The Great Martyr Barbara lived in present-day Lebanon during the third century and was locked up in a tower and executed by her father Dioscorus because she had secretly converted to Christianity. According to Christian lore, God struck her father with a blast of lightning as punishment, hence the association with explosives and flashes of light in underground darkness. Saint Barbara became the patron saint of mining and geology.

Some names are more famous than others, so the most celebrated machine is the great Bertha. Bertha was a 17.5 m diameter tunnel boring machine built specifically for the Alaskan Way Viaduct replacement tunnel project in Seattle, Washington. The excavation began in 2013, but that same year portions of the main bearing seal system were damaged, which caused the bearing to overheat during operation. Over the next two years, a pit was dug in order to access and pull the machine’s cutterhead out for repair. Due to a two-year delay, large costs were incurred that surpassed the planned budget.

The Gotthard Base Tunnel is the longest railway tunnel in the world, saving an entire hour of travel between Zurich, Switzerland and Milan, Italy. Its length is 57 kilometers, while the machine that burrowed through the final part of this tunnel is called Sissi.

The famous Channel Tunnel connects Britain with continental Europe (France). This tunnel has the longest underwater section in the world, a full 37.9 kilometers, and its entire length is 50 kilometers. Although both the British and the French worked on the construction of the tunnel, the British side built most of it. Unlike the British machines, which were given alphanumeric names, all French boring machines were given female names: Brigitte, Europa, Catherine, Virginie, Pascaline, Séverine.

Which method of tunnel construction will be chosen depends on various factors, such as the properties of the envisioned tunnel, existing groundwater, geological structure, machine availability. TBMs are very efficient, but require a significant initial investment, and because of their size and complexity, transportation is difficult and sometimes unprofitable. Because of this, they are often built purposefully, for a specific tunnel construction site.

In our region, most tunnels are located on highways. The ‘New Austrian Tunnel Method’ (NATM) is most often used for construction. It is flexible and can be used in various situations, with low investment costs. It is assumed that tunnel boring machines are not used in Croatia due to short tunnel sections (up to approx. 6 km) compared to other countries (e.g., Norway – approx. 25 km). The high costs of TBMs transportation as well as the lack of skilled labor should also be taken into account.

Read more: Lighting effects in the longest road tunnel in the world – the Lærdal Tunnel, Norway